With the advance of new tools such as UAVs, or drones, can give bridge inspectors and others a much needed assist in certain inspection scenarios. But nothing can replace a competent human inspector conducting an “eyes-on” and hands-on inspection in person.

Note that the emphasis here is as much on “competent” as “in person.”

Despite the tools on hand and the aerial platform being utilized, a bridge inspection is ultimately only as good as the inspector. And, when it comes to bridges, a less-than-competent inspection can lead to disaster. 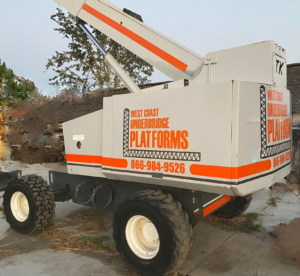 When a Failed Inspection Could Lead to a Failed Structure

Back in May 2021, a structural crack was discovered on a major support beam of the Hernando de Soto bridge over the Mississippi River between Arkansas and Tennessee. This belated discovery occurred during an annual routine inspection. The bridge was immediately closed to all traffic on the I-40 roadway that traversed the bridge, along with river traffic beneath.

According to a Memphis Commercial Appeal news story the following week,

“An inspector who failed for years to spot a fracture that led to last week’s sudden I-40 shutdown has been fired and could face charges, Arkansas officials said…

Arkansas Department of Transportation officials confirmed the fracture that halted traffic on the I-40 bridge has existed since 2019, and was overlooked by an employee of the department.

‘From our investigation we have determined the same employee who conducted the inspection in 2019 and 2020 failed to carry out his responsibilities correctly,’ said ARDOT Director Lorie Tudor.”

The news story went on to note that the Arkansas DOT (ARDOT), the agency responsible for inspections of the bridge below pavement level, did not utilize drones prior to 2019. While drone footage captured in 2019 reportedly showed the crack in the bridge structure, the portion of the drone video showing the damage was less than one second long out of a five-hours of video.

This says both something about the drawbacks of UAVs for bridge inspections and the critical role of “eyes on” and “hands-on” human inspections.

The Hernando de Soto Bridge was initially shut down on May 11, 2021. One month later the bridge was still closed and is now entering phase two of the repair project, in which the cracked beam will be replaced and another re-installed.

In the interim, I-40 traffic has been shifted to the I-55 bridge, which is causing slowdowns for drivers over the Mississippi River between Memphis and Arkansas.

The Importance of Reliable Under Bridge Platforms

While every engineer and contractor understands that there is an unavoidable element of human error inherent in bridge inspection work, processes and tactics are employed to minimize and mitigate this as much as possible.

But unreliability and even incompetence is another issue altogether. And the consequences can be tragic and even catastrophic.

A subsequent news story from a Memphis news station reported,

[T]he nine bridges inspected by the fired inspector will be re-inspected. That includes the heavily travelled Highway 49 bridge that leads to Helena -West Helena. A spokesperson for the Arkansas Department of Transportation (ARDOT) says the Highway 49 bridge and the eight others are considered ‘fracture critical bridges,’ which means an element of the structure, if it failed, would cause a partial or total bridge collapse.”

Needless to say, the combined costs of diverted trucks, commuter slowdowns, bridge repairs, disrupted commerce, and the re-inspections of numerous bridges are going to be astronomical. On the other hand, the incident does serve to highlight the need for more government action and even funding for infrastructure repair and rehabilitation.

In the meantime, the debacle also serves to underscore the continuing need for reliable and high-quality routine bridge inspections throughout the country. The importance and value of the tens of thousands of routine and other types of bridge inspections carried out every day cannot be over-emphasized.

And the importance and value of high-quality and reliable inspection tools and equipment – such as under bridge  platforms – cannot be over-emphasized, as well. While there is value in new approaches such as UAVs for visual bridge inspection work, to date there is nothing that can replace a well-trained and competent bridge inspector placed under a bridge structure.

Your Number One Best Choice for Under Bridge Equipment

We invite you to look into Under Bridge Platforms.

We provide quality under bridge equipment throughout all the Western States, including California, Washington, and Oregon. Our inventory of snooper trucks and under bridge access platforms includes the state-of-the-art self-drive access platform, the Truck Mounted Hydra Platform HPT43 Self-Propelled Under Bridge Access vehicle.

In addition, we are proud to offer top-of-the-line under bridge platforms such as: