Bridges And Bridge Inspections In The US

There were over 616,000 bridges in the United States as of 2019. And of these, more than 47,000 bridges were in poor condition and in need of urgent repairs, according to a report issued by the American Road and Transportation Builders Association in 2017.

The report, known as the 2017 Infrastructure Report Card, noted that while the total number of structurally deficient bridges have decreased, the average age of bridges in the US is increasing each year. What this means on a practical level is that many of our road and railway bridges are approaching a point where they will need to be replaced. 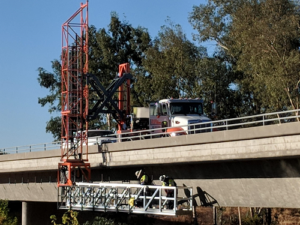 When it comes to bridges, not every location has the same burden. Some state DOTs, for example, have relatively few structures to routinely inspect, maintain, and repair.

The five states with the least number of public bridges as of 2019 were:

The small geographic size of four of these states and DC, combined with the population of all five locations, makes this list no real surprise. What may be a bit more surprising for some is the disparity in the total number of bridges in the “number one” state, Texas, and the subsequent states that make up the top five states with the most bridges in 2019:

The Lake Pontchartrain Causeway is a fixed link composed of two parallel bridges crossing Lake Pontchartrain in southern Louisiana. The longer of the two bridges is 23.83 miles (38.35 km) long making it the longest bridge in the United States.

The tallest, or highest, bridge in the US is the Royal Gorge Bridge spanning the Arkansas River in southern Colorado. At a dizzying height of 955 feet, this tourist attraction was completed in 1929.

While the Royal Gorge Bridge might be considered old at over 90 years, it’s still a youngster when compared to the oldest bridge in the United States that is still being used today.

One of the first railroad bridges in the country is the Baltimore & Ohio Railroad’s Thomas Viaduct built in 1835 located at Elkridge, Maryland over the Patapsco River. At the time of its construction was the world’s longest masonry bridge and the first curved structure of its kind. It is still the largest bridge of its type and still carries regular freight and passenger trains.

The worst bridge collapse disaster in the United States occurred on December 5, 1967 when the Silver Bridge, between Point Pleasant, West Virginia and Gallipolis, Ohio crumbled and fell in the Ohio River. 64 people and 32 vehicles fell into the river, and 46 people died.

It was this unprecedented disaster that spurred the legislation and formation of the National bridge inspection program that was created in response to the collapse.

One of the results of the program was regular inspections of roadway bridges throughout the United States.

“The NBIS requires safety inspections at least once every 24 months for highway bridges that exceed 20 feet in total length located on public roads. Many bridges are inspected more frequently.  However, with the express approval by FHWA of State-specific policies and criteria, some bridges can be inspected at intervals greater than 24 months. New or newly reconstructed bridges, for example, may qualify for less frequent inspections.”

In addition to the bridge inspection program and regulations, a bridge inspector’s training manual was prepared, and a training course was developed to provide specialized training. Due to the varying needs and circumstances of bridges throughout the country, some state and local inspection standards are often even more restrictive than the national standards.

There are five basic types of bridge inspections that are conducted. These are:

The primary purpose of routine inspections is determining the physical and functional condition and integrity of a bridge structure.

Typically, routine inspections are conducted with manual, visual inspections. These inspections require the use of a variety of tools for cleaning, probing, sounding, and measuring. Other instruments are also used by inspectors such as borescopes, microscopes, and other optical devices.

Bridge workers also keep busy with routine cleaning and bridge repairs, as well as performing various maintenance tasks on all types of bridge. And these tasks, as well as routine inspections, require under bridge accessibility.

Most every professional that works with bridge repair, cleaning, maintenance, and inspections makes use of some type of under bridge inspection platform.

As explained by the Minnesota DOT,

“An under bridge inspection vehicle is a specialized bucket truck with an articulated boom designed to reach under the superstructure while parked on the bridge deck.

Usually the third boom has the capacity for extending and retracting, allowing for greater reach under a structure. Some of the larger under bridge inspection vehicles have four booms, allowing an even greater reach.”

There are several different variations including self-propelled units, truck-mounted units, and trailer-mounted units. Some inspection platform equipment utilizes outriggers for added stability, while others can be mounted on a portable track for versatility.