When An Under Bridge Platform Is The Only Way To Go

Routine bridge inspections are nothing new to anyone in the field today. But, relative to the history of highway bridges even just in the United States, they are a recent innovation.

Prior to 1968, a mere 54 years ago, federally mandated and regulated highway bridge inspections did not exist. Until then, bridge inspections were strictly conducted on an “as needed” basis or as required by various state and local administrations. 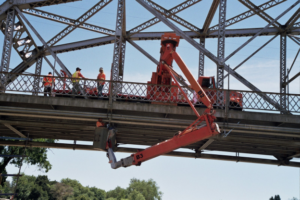 The Tragic Catalyst for Bridge Inspections

It was on December 15, 1967, that the Silver Bridge between Point Pleasant, West Virginia, and Gallipolis, Ohio, collapsed, with a subsequent loss of 46 lives.

According to a memorial story from the Charleston Gazette-Mail ten years ago, the bridge was suspended by a chain-like series of plates called “eyebars.” Federal investigators eventually determined a crack in eyebar number 330, caused the Silver Bridge to collapse.

In the aftermath of the tragedy, the investigation into the cause of the collapse eventually led to the National Bridge Inspection Standards (NBIS) and the modern bridge safety program.

A section on “Bridge Inspection” was included in the legislation of the Federal-Aid Highway Act of 1968, which was signed by President Lyndon B. Johnson on August 23, 1968. As a result, all bridges constructed with federal funds, or which carried a federally funded road, were required to be inspected based on DOT‐established standards for bridge safety.

Since that time, the regulations now require inspections of bridges on all public roads, on and off Federal-aid highways, including tribally and federally owned bridges, and private bridges connected on each end by a public road.

According to the U.S. Department of Transportation and the NBIS, and as anyone involved with highway bridge inspections and repair knows, there are five basic types of bridge inspections that can take place: initial, routine, in-depth, damage, and special. And because of the sheer height and width of many of our nation’s highway bridges, under bridge access can be a challenge.

Which is why oftentimes an under bridge platform is the only way to make that happen.

In 1968 there were few easy methods for gaining access to hard to reach areas of bridges during inspections.

For example, prior to the proliferation of the wide variety of under bridge access vehicles and other equipment today, common access equipment included ladders, rigging, and scaffolds. Later on in the early 1970s, several types of access vehicles came to be used including  manlifts, bucket trucks, and under bridge inspection vehicles.

In addition, as one Minnesota DOT publication notes, “climbers” can sometimes be used, as well. Climbers are mobile inspection platforms or cages that “climb” steel cables or truss members. They are well suited for the inspection of high piers and other long vertical faces of bridge members.

Of course, for most smaller bridges or those that are less than 30 feet or so above the ground, using a manlift or bucket truck can be less time consuming than using a large under bridge access unit with multiple articulated booms.

In addition, any of these vehicles and equipment was more convenient and arguably safer than using a ladder or rigging to inspect a structure.

Fast forward to 2022 and we find ourselves with a broad range of truck-mounted, trailer-mounted, and self-propelled under bridge platforms and high-capacity “bucket” trucks.

For those massively large highway bridge structures with deck spans exceeding 200 feet across, for example, there are vehicles available such as the Anderson Hydra HPT66 truck-mounted platform that can reach 4,100 square-feet of under bridge area from one placement with its 66-foot long work platform.

Large or small, tall or relatively low profile, highway bridges will always need inspections as well as maintenance and repair work, which is why under bridge platforms are the way to go.

Under Bridge Platforms: When You Need the Best in Bridge Access Equipment

Under bridge access is a regular part of the work for inspectors and technicians working for state DOTs, civil engineering firms, highway construction companies, or private contractors that specialize in bridge work.

And that means that having reliable under bridge access is also a regular part of your line of work.

The good news is that Under Bridge Platforms is the professional firm that you can rely on to provide you with and guide you through the process of buying or renting, the right under bridge inspection vehicle and under bridge platform equipment you need for your next project.

At Under Bridge Platforms we make it our mission to always help you make the right choice.

Our under bridge access equipment fleet is made up of several different under bridge inspection platform vehicles, all of which feature multiple capabilities. And along with price and reach capabilities, the structure and the terrain of your project are also key factors for determining the best choice for your work.

Under Bridge Platforms provides quality under bridge equipment throughout all the Western United States, including Utah, California, Nevada, Washington, and Oregon.

We are proud to be the only company in California that offers total under bridge access. By offering high quality customer service, we have managed to build long-lasting relationships with our esteemed customers. And we work hard to keep it that way.

Contact us today to discuss the specific needs for your project.