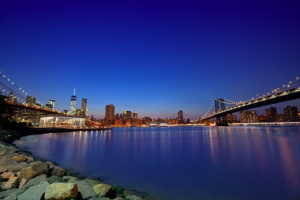 As of 2017, the United States had more than 614,300 bridges, according to Infrastructure Report Card. Of these bridges, almost 40 percent of them are more than 50 years old.

For over 200 years of American transportation history there was no comprehensive requirement for ensuring bridge safety and inspections. All this changed suddenly and tragically in the late 1960s.

The events bringing about the National Bridge Inspection Program (NBIP) is summarized by the federal Department of Transportation,

“The safety of the bridge network came into question in the late 1960s when, on December 15, 1967, the Silver Bridge spanning the Ohio River between West Virginia and Ohio collapsed during rush-hour traffic. This catastrophic event resulted in 46 fatalities and numerous injuries, prompting national concern about bridge conditions and safety.

The legislation was enacted on December 31, 1970, and established uniform, national-level standards for bridge inspection and safety evaluation.

In addition, there are numerous state, regional, and agency standards and requirements for bridge inspections that range from routine, biennial inventory inspections to in-depth, emergency inspections, including underwater inspections.

A concise description of the numerous types of bridge inspections being performed comes from the Society of Professional Rope Access Technicians (SPRAT):

components, may be above or below water level.

physical and functional condition of the bridge. Underwater components are usually

or manmade. Examples include earthquakes, floods, collisions affecting the structure, or

particular area of the structure only.

They note, too, that due to its versatility, industrial rope access is typically used to perform in-depth inspections. And, while this may the case, the vast majority of bridge inspections of every type are performed using mechanical bridge riggers such as cranes and aerial lifts.

When it comes to routine bridge inspections, the most common approach is to make use of underbridge inspection vehicles. This is especially true for those bridge types known as “deck girder” bridges.

These are bridges that have superstructures constructed of steel beam shapes that support a roadway deck above the beams. Typically, these beam shapes are tall enough to climb on or along. However, if the steel section is too short for an inspector to climb or otherwise access using rope and harness rigging, then some type of mechanical access is used.

The advantage of making use of mechanical access methods is that they typically require less time and effort to access the bridge superstructure. And the most common industry practice for accessing these types of bridges is to use an under bridge inspection vehicle (UBIV).

UBIVs are bridge riggers, often referred to as “snoopers”, that are able to access and inspect these areas more efficiently than traditional rope rigging and climbing methods.

The state of Minnesota’s DOT defines UBIVs in a bridge inspector’s reference manual,

boom designed to reach under the superstructure while parked on the bridge deck.

Usually the third boom has the capacity for extending and retracting, allowing for

greater reach under a structure. Some of the larger under bridge inspection vehicles

have four booms, allowing an even greater reach.”

What is interesting, as well, is that the bridge rigging industry uses a number of common terms for these different types of equipment and often interchangeably.

Boom lifts, aerial lifts, articulated boom lifts, snooper trucks, under bridge platforms, under bridge inspection vehicles and other names are heard when referring to these specialized cranes and booms.

And these latter vehicles are manufactured in a wide variety of configurations.

When it comes to repairing bridges or performing bi-annual inspections, you know that you’ll need a variety of equipment to carry out your work. However, bridge riggers are not cheap. And most engineering and inspection firms aren’t set up to purchase and maintain fleets of specialized vehicles and equipment, not to mention having the space and facilities to store them..

This is why renting bridge riggers and other bridge inspection vehicles is the best way to access the right equipment when you need it.

Regardless of the volume of inspections work your company does, you likely have periods where you only need a few under bridge inspection units or bridge boom lifts. And there are probably other times when you have several jobs going on simultaneously.

Another advantage of renting your bridge rigging and other related equipment is that you have access to newer and more advanced models. If you actually do purchase your own bridge rigger, you know it is a major capital investment. Consequently, you’re likely to rely on that unit long past the time it should be replaced. With rented equipment, however, you are much more likely to have much newer and numerous models to choose from, as well.