Routine Bridge Inspections And The Fate of Thousands

Three months, 17 plates, and 60,000 commuters every day. Not to mention the approximately $70 million in unanticipated costs the trucking industry has absorbed over since the I-40 Hernando de Soto Bridge connecting Arkansas and Tennessee closed on May 11.

That’s been the cost so far that has resulted from repairing a major crack discovered underneath the bridge which serves as a major traffic artery between the two states.

The repairs themselves have been extensive and complex, which has added to the delays and collective frustration of transportation officials, commuters, and truckers alike. According to a recent news story, the Tennessee DOT stated,

“Aside from the drilling, bolting, and torquing, installation of these plates is a process that also involves the removal of the lateral bracing, modification of the gusset connection plate, and reinstallation of the lateral bracing. Once the last bolt is torqued on the plate, these items can be completed. This work will likely push us into the first part of August in opening the bridge to traffic. We will have more of a specific schedule next week.” 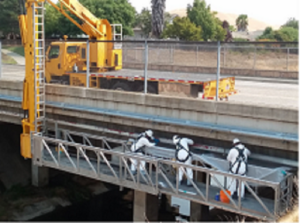 For want of a nail the shoe was lost;

For want of a shoe the horse was lost;

For want of a horse the battle was lost;

For the failure of battle the kingdom was lost—

All for the want of a horse-shoe nail.

The fact remains that what is at issue in this unfortunate situation is not that a bridge is being repaired. Repairs must be made on bridges once an issue is discovered, which is the primary purpose of routine bridge inspections. What is at issue is whether this particular facture should have been discovered long before May 11, 2021.

In this instance, there is sufficient evidence to show that the damage was quite visible as far back as 2019 and possibly earlier. All of which means that the fracture should have been discovered in the summer of 2019 at the latest.

According to the U.S. Department of Transportation,

Bridges need to be repaired.

And when a bridge closure is required in order to complete the repair, the cost to commerce and commuters can add up. However, this would be true regardless of whether they occur now or two years ago when the repair issue first arose. What is unacceptable in this instance is that a certified bridge inspector failed to carry out a fundamental task in the course of a routine bridge inspection.

This begs the uncomfortable question, “What if the fracture in the Hernando de Soto Bridge remained undiscovered until a catastrophic failure of the beam occurred?”

The Importance of Proper Equipment for Routine Bridge Inspections

Interval, or “routine”, bridge inspections are perhaps the most common inspections performed for most of America’s highway bridges. According the Code of Federal Regulations,

“This is a regularly scheduled periodic inspection. It generally includes both observations and hands-on measurements. A routine inspection is used to determine the physical and functional condition of the bridge, identify changes in the bridge from the last time it was inspected and to make certain that the bridge is safe and meets service requirements.”

Certifications and individual requirements for inspectors and others involved will vary somewhat from state to state, along with the standards established by the U.S. Department of Transportation and the National Bridge Inspection Standards (NBIS).

Underbridge inspection units are specialized vehicles that are used for underbridge inspection, as well as bridge maintenance and repairs. They allow the operators to place workers on boom platforms directly under the bridge for safe and efficient access.

While there are other approaches that are still used for underbridge access such as rope rigging and scaffolding, truck or trailer-mounted underbridge cranes remain the best way to access most highway bridges and perform bridge work, including those all-important “routine” bridge inspections.

We provide quality under bridge equipment throughout all the Western States, including California, Washington, Oregon, Idaho, Nevada, Montana, and Wyoming.

Our inventory of under bridge access platforms includes the state-of-the-art self-drive access platforms such as the versatile Aspen Aerials A-30 Bridge Inspection Unit and the Truck Mounted Hydra Platform HPT43.

There are a variety of capabilities that come with different bridge inspection platform vehicles. In addition, determining the best choice for your work or project also depends on both the structure and the terrain. So, while cost is important, the vehicle capabilities and your specific project needs should be the dominant deciding factors.

With a professional firm you can rely on to guide you through the process, buying or renting the right under bridge inspection vehicle and bridge inspection platform equipment for your project means we are here to help you make the proper selection.

We take a great deal of pride in being the only company in our industry based in California that offers total under bridge access. By offering high quality customer service, we have managed to build long-lasting relationships with our esteemed customers. And we intend to keep it that way.

Contact us today and let us help take care of all your under bridge platform needs.